I have written exactly one piece of fiction—flash fiction called “Latter-day Confederacy of Nations,” which soon will be included in an anthology of alt history called States of Deseret. I signed the contract today. Also today, I delivered a scholarly article on Joseph Smith and Handsome Lake for a collection on Mormons and Indians to be published by University of Utah Press. Same subject, two completely different approaches. Making it all up was much more difficult. I spent three months researching a two-page story. I only spent about a year researching and writing the 65 pages that became the article. If you want to know how my renewed interest in writing and publishing goes, comment or send me a message.

For my Master’s research at The George Washington University in Washington, DC, I dug into the string of stories told by political singers and songwriters about those who came before them. Each story became a polished bead on the string of stories. I covered the full (until then) 20th century, since so many of the musicians’ stories reached back to Joe Hill.

I dragged my guitar and my book of American folksongs into class, and I sang for my fellow students “Joe Hill” (the Earl Robinson / Alfred Hayes song). I spent all of my days in Washington, DC, archives and libraries learning more about Joe Hill, about rebel music, and about those strings of stories. I dug so far that I found Joe Hill’s ashes in the National Archives. (YES! It was me. I’ll tell that story later.)

When it was time to leave school for the world of jobs, I had a choice of National Geographic or the Folkways archive at the Smithsonian Institution. No contest. I went to Folkways, where I was an archivist.

Almost as soon as I landed at Folkways, I began to push for a Joe Hill anniversary album. The 75th anniversary of his death was coming up, and I wanted to create a new album. I was the squeaky wheel. I was given a budget of $4,000 to stop squeaking. $4,000 doesn’t go very far in producing 15 tracks. I begged, arm twisted, worked overtime to do my actual job plus producing. I managed to pull together a great line up of (then) contemporary performers and older recordings, including a couple I dug up in archives, to create Don’t Mourn—Organize! Songs of Labor Songwriter Joe Hill (SF 40026). (Yeah, I wouldn’t give it that title today.)

My delayed graduation in 1990 (after finishing classes years before) coincided with the release of the album. I pulled a lot of research from my thesis to create long, extensively researched liner notes. Then, my bosses cut the notes. A short version was published. The end. Except that I printed several dozen copies of the extended liner notes, put a medium red songbook cover on them, and spread them around to labor activists and music listeners.

After referring to my longer liner notes several times last year, during the Joe Hill 100th anniversary year, I’m getting around to publishing the extended liner notes for the album. Apparently, I keep talking about this, even 25 years later. This video is a short clip from an interview I did with the Salt Lake Tribune on Joe Hill’s music.

There is more where that came from. Maybe later.

And, sometime I’ll tell you about the gut wrenching sexism of that music world where I stubbornly created the Joe Hill recording. Looking back, I can see that having a specialist’s degree in the subject got me nowhere among the guys. Working in a music archive wasn’t the dream job you might think it would be. I pre-quit one day, yelling from the stacks for anyone who could hear that I couldn’t stand to work anymore where people had so little respect for music. I was idealistic. I might not be that idealistic anymore, but I was tired of music being background for those around me. Music was serious business for me. So, I decided to push it further and get a doctorate in religion and racism. Can’t make that background, right? That’s a short placeholder. I’m telling you now so I won’t forget to tell you later. 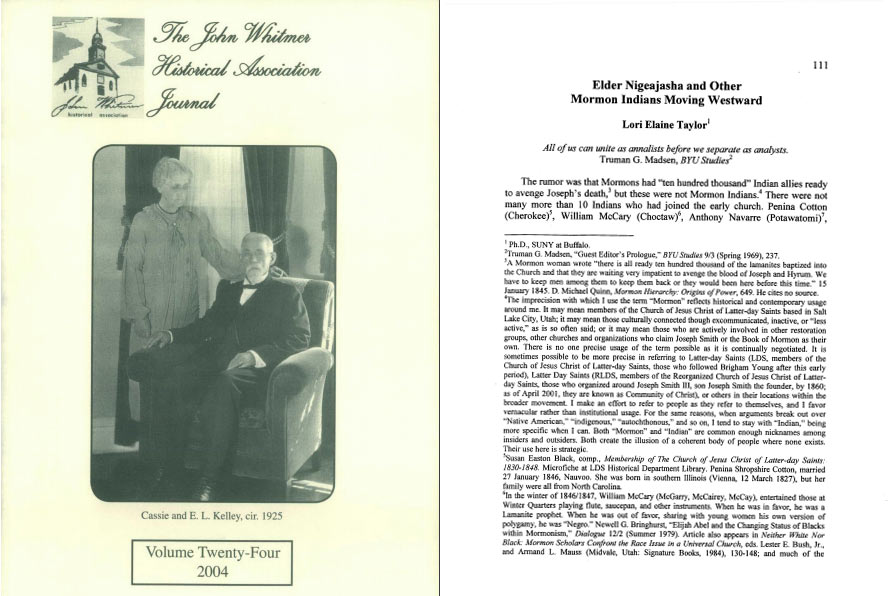 As a long-term project, I am making my articles available. As I find copies of published articles and as I transfer old formats from conference papers (Jaz disk, anyone?), I will add these.

The latest—actually, the first—is “Elder Nigeajasha and Other Mormon Indians.”

This excerpt from my doctoral dissertation (Telling Stories about Mormons and Indians) was given as a paper at the John Whitmer Historical Association meetings in Independence, Missouri, fall 2000. I remember it well because I brought my 5-month old son and my mother with me. My (now 6′ tall) baby was 5 days old when we walked through my graduation together.

My fellow historians of the Community of Christ (then still RLDS) were welcoming and generous. I received an award for my dissertation, defended earlier that year. Paul M. Edwards, a historian of the restoration movement, had been one of my readers. After hostility from a well-known LDS historian who had also been a reader, I was surprised others received the dissertation positively. Paul said my work gave him “hope for Mormon history.” So, of course I took my baby to Missouri to say thank you.

Within the past few months, a colleague told me she could not find this article either on JSTOR or online. It’s there, in several places, but perhaps some algorithm has hidden it all. So, this article rose to top priority. Now, “Elder Nigeajasha” is easier to find—along with its 73 footnotes. 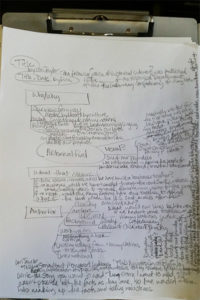 Today I did something I’ve never done before: I wrote fiction with the intention of showing it to other people.

If you already do that and think, “Oh, yeah. Big deal.” IT IS! I haven’t done this before. I write write and over-write. Yes, I can write, as long as I have complete control over the facts. I realized that I can have far more control over facts I make up, so I’m taking a big dive.

Thanks to a couple of friends for pointing out a contest with a deadline. Without a deadline, I surely would have put this off for years. Seriously, years. I’ll do it when I’m ready but I’m never ready years.

Let me take a deep breath and hit submit for the contest, then I’ll share the story.