Join me for a roundtable discussion of Essays on American Indian and Mormon History at the 2020 Mormon History Association conference in Rochester, New York, June 4-7, 2020.

This abstract describes my likely contribution.

When a colleague told me a story claiming a connection in western New York between Joseph Smith and followers of Haudenosaunee prophet Handsome Lake (Sganyodaiyo), I dug in to find that the story had been told since the 1960s. Joseph Smith, the story claims, got the idea to blend Christianity with the Gaiwiio, the Word of Handsome Lake. As history, the story is plausible, even if no one can prove it true (or untrue). As a story, though, I find myself most interested in how the idea travels and gains momentum. Stories fulfill the wishes and needs of the tellers and of the listeners and readers. They sound true. They fit. We as historians and our subjects in the past all tell stories that we want to be true. We tidy up the edges and reshape our memories, knowingly or not, until our stories become our truth. And yet, the evidence still tells me that all tellings of this particular story lead back to a trickster storyteller in the mid-twentieth century,

I have an article coming out soon in an anthology. Rather than starting from an old academic bio for the requisite author biography, I started from a helpful “how to grad school” outline. When I was in grad school and the Wild West internet was new, I had no such outline. I love doing all of this over again.

This is who I am now.

Lori Elaine Taylor is an independent scholar with a specialization in propaganda, persuasion, and the slippery stories people tell themselves about their collective pasts. Her work includes religion and racism, music and music communities, and labor history. Lori completed her Ph.D. at the University at Buffalo and her M.A. at The George Washington University. The John Whitmer Historical Association awarded her “Best Dissertation” for “Telling Stories about Mormons and Indians.” She recently published flash fiction, “Latter-day Confederacy of Many Nations,” in the alternate history anthology, States of Deseret. Her superpowers are writing Python and speaking Finnish. 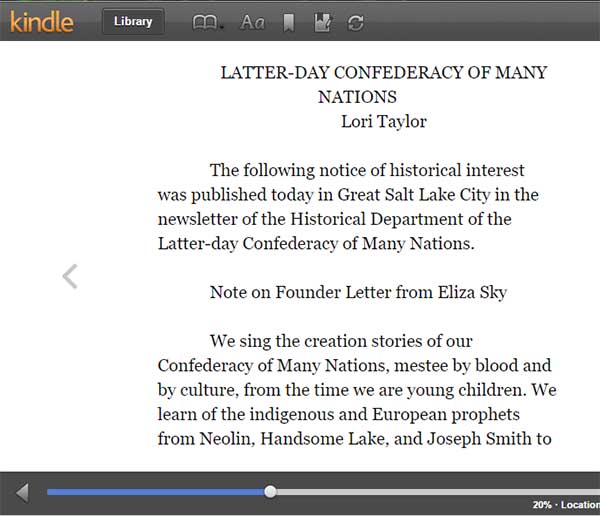 I wrote “Latter-day Confederacy of Nations,” and I got paid! Exciting when first it happens. This may only be $25, but it’s $25 more than zero. The short story collection, States of Deseret, will be out this spring.

My first payment for fiction. Nice.

What happens when Eliza Sky, a young historian from the Latter-day Confederacy of Many Nations, leaves Salt Lake City for a fellowship at the Smithsonian Institution in the United States and finds a document that sheds new light on the Mormon mission to indigenous peoples in 1830? In this alternate timeline, that mission in the most intense year of nineteenth-century Indian removals wasn’t “The First Mission to the Indians,” as it is in our timeline. In her timeline this week-long meeting brought together Haudenosaunee and Mormons who fomented resistance across the continent and led the establishment of a Confederacy indigenous nations from the western desert to the Mississippi River, dividing the United States to the west and east. The new document shakes up the young historian. If this first long meeting between Mormon missionaries and Tonawanda chiefs wasn’t a meeting of equals, what was it?

My first short story will be published in the States of Deseret anthology. I’m so excited to see the table of contents. I look forward to reading all of the stories by the other seven authors.

And, now I can’t let go of my own story. I have to write more. More stories? Novella? Novel? Not sure. I have to explore how this Confederacy formed and what this means for Eliza. Even the first paragraph above tells more about that timeline than is included in the story. Even if it’s fiction, I’m still do research like a plow.